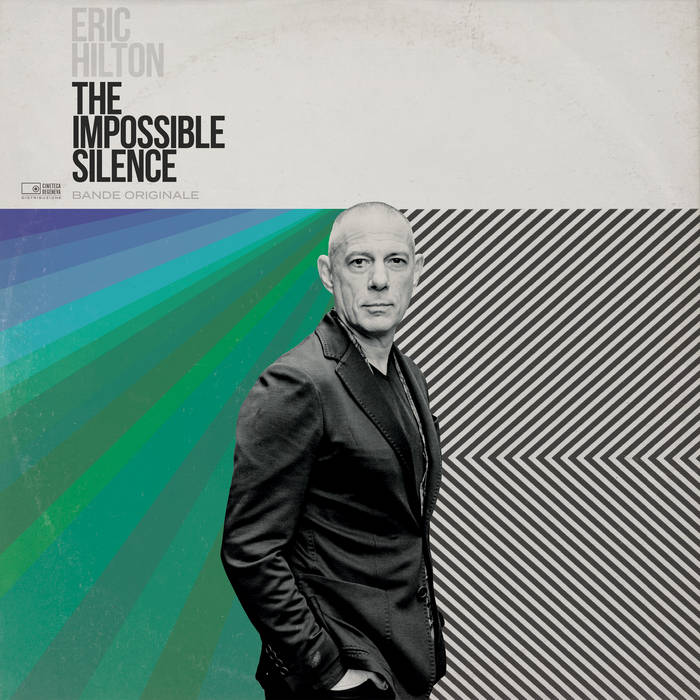 ij13 A fan of Thievery Corp. for years, absolutely floored with "Infinite Everywhere". Thank you Eric! This music is warm, comforting, haunting, ethereal, familiar, inspiring, calming. All of these and more.

From Thievery Corporation co-founder Eric Hilton comes “The Impossible Silence,” a Director’s cut of elegant electronica inspired by vintage film soundtracks of the 1960’s and 70’s. Crafted at Hilton’s Winter Palace Studio, “The Impossible Silence” unspools across 13 atmospheric cuts, a soundtrack to a film that exists only in the mind of the composer - and anyone who listens.

Making a “filmic” record can have its perils; often these efforts can veer towards kitsch or parody. But Hilton's uncanny ability to musically shapeshift, ably honed over 25 years of genre-hopping recordings with Thievery Corporation, serves him well on “The Impossible Silence.” Like a movie, the record flows through a variety of situational moods, at times melancholic, idyllic, while some tracks are slightly foreboding and others just plain groovy. This was intentional. “Not being bound by a real movie, or working for a director, I can control the ebb and flow of the mood throughout,” says Hilton. “I didn’t want to break the spell, I want the listener to be entranced.”

The social and sexual revolutions of the late 60’s and early 70’s drove a coming together of the classically trained orchestral musicians, who traditionally scored films, with a new breed of unfettered funk and rock session players, brought in to provide a more contemporary sonic palette. This collision, funded by the large budgets of film studios, drove a unique moment in soundtrack music. Hilton is hugely influenced by this period, with many of the “top shelf” records in his collection filled out by the composers who masterminded these scores. “I’m very inspired by Armando Trovajoli, Piero Umiliani, Lalo Schifrin, Tony Hatch, Francis Lai and others,” he says. “They had all these tools at their disposal, and used them to make music that's almost impossible for a person to make now - you would need an orchestra (and a place to record them), you'd need charts for all the musicians, a crew, a huge budget….this is my attempt to emulate that, obviously not at the same scale, but to evoke that ethos.”

Hilton plays most of the instruments on “The Impossible Silence;” and readily admits this album was one of the most challenging projects he’s undertaken in his career. “In some ways, making “The Impossible Silence” reminded me of “Saudade,” which was the hardest Thievery album to record. The quieter and more delicate the music is, the harder it is to get the balance of everything right.” says Hilton. “I created many of these songs prior to my previous record “Infinite Everywhere,” which I released first. “Infinite Everywhere" works better as a gateway to my solo work for Thievery fans, it’s more familiar sounding. "The Impossible Silence" took months and months of extra work, which is why I’m releasing it now. When we were nearly finished mixing it, my engineer Igor said “this music sounds expensive!” laughs Hilton.

Although “The Impossible Silence” is best listened to in its entirety as a set piece, standout tracks abound. The lead single, "Alma de Lisboa,” provides a memorable opening to the album, and if sent back via time machine to Ibiza in the 1990’s, the track would surely have been in heavy rotation at Cafe Del Mar chillouts. The elegant closing song "La Nuit” features Elin Melgarejo, a multi-lingual singer who added her talents to three tracks on the 2014 Thievery Corporation album “Saudade,” and has performed live with the group. "I attempted to write the song in French using Google translate, and she helped greatly, correcting the phrasing and ultimately co-writing the lyrics. Elin’s contribution is incredible,” says Hilton.

“The Impossible Silence” is the second of several full-length album projects that Eric Hilton has planned for release over the next year. Despite a 25 year (and counting) legacy, this founding Father of the downtempo electronic music scene isn’t leaning on nostalgia. With a level of output that could justifiably be referred to as prolific, Eric Hilton is creating vibrant, jewel-like music that will satisfy faithful Thievery Corporation devotees, while expanding the empathic musical horizons of anyone truly willing to listen.

“The Impossible Silence” by maestro Eric Hilton - screen it now at an imagination near you.

From Thievery Corporation co-founder Eric Hilton comes “The Impossible Silence,” a Director’s cut of elegant electronica inspired by vintage film soundtracks of the 1960’s and 70’s. Crafted at Hilton’s Winter Palace Studio, “The Impossible Silence” unspools across 13 atmospheric cuts, a soundtrack to a film that exists only in the mind of the composer - and anyone who listens. ... more

Bandcamp Daily  your guide to the world of Bandcamp